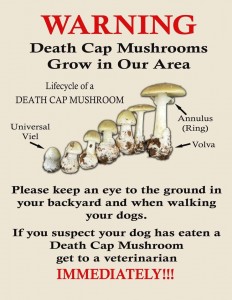 It’s that season again. Fall is here. Pumpkins are ripening and children are picking out their Halloween costumes. There’s something else that’s growing that shouldn’t be picked unless you can positively identify it. Mushrooms!

While fascinating and tasty from the grocery store, wild mushrooms should be approached with caution. Never pick and eat a mushroom that you can’t positively identify. Toxic mushrooms can easily resemble safe ones unless you’ve done your research or had proper training. The symptoms and toxicity vary by the variety of mushroom ingested. Mushrooms can be found in spring, summer, and fall

Both people and pets are susceptible to mushroom toxicity. Pets are prone to foraging; particularly dogs! Be aware of mushrooms growing in your yard or places your pet visits. If your pet nibbles on a mushroom, clinical signs may occur as early as 6-8 hours or as long as 24 hours following ingestion. Intensity may also depend upon how much was eaten. There is no antidote for mushroom poisoning. All treatment is supportive.

Surprisingly the poisonous Amanita Mushroom, also known as Death Cap, does not taste bad. It originated in Europe, and came to the US via roots of imported trees like cork oak. The Death Cap can commonly be found growing around oak trees and cork oak. It’s found most reliably from late September through late October. When ingested it causes acute liver failure and death. The Amatoxins found in the mushroom affect rapidly replicating cells, like in the intestines and liver. In the greater Bay Area, Death Cap can be found at all times of the year, but most abundantly during fall and early winter rainy season.

If you suspect your pet has eaten a mushroom, call your veterinarian immediately and get your pet seen ASAP! Bring a sample of the suspected mushroom for identification. Do not place the mushroom in a plastic bag, instead wrap in a moist paper towel, wax paper, or paper bag. Alternatively, call the Animal Poison Control Center 24 hour emergency veterinary poison hotline on: 888-426-4435. www.aspca.org/apcc

Death Cap mushrooms can be identified by a white “skirt” under the cap, white gills, and a bulb usually hidden by leaf litter or in the ground. The color of the cap can be quite variable, but classically will have a greenish-yellow color. It can also be green, yellow, brown, tan, or rarely white. The gills, under the cap, are white but don’t quite meet up with the stem; along with a white bulb at the bottom of the stalk called a volva. It is frequently mistaken for the non-poisonous Paddy-Straw mushroom. 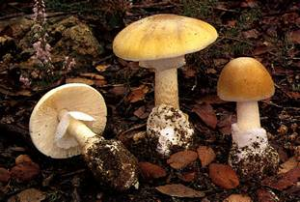 Amanita Mushrooms- Notice the white gills that don’t meet up with the stem (stipe), and the skirt right under them (left). The bulbous bottom usually hidden in dirt or leaf litter. These caps are yellowish (middle), and tan (right).