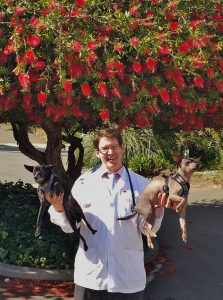 In high school, I was affectionately called Fievel (After Fievel Mousekewitz, the small immigrant mouse in the1980’s animated movie called An American Tail). I got this name because I was easily the smallest boy in school, and remained under 100 pounds until college. In vet school, I was often referred to as “the most interesting man in the world”, in reference to Dos Equis commercial guy. The reason I was given this name eludes me, my best guess being that it was a deft use of irony. I don’t have any current nicknames.

Where is your hometown?

Both Las Vegas NM, and Santa Fe NM (I was born in Las Vegas. My parents were divorced, and I grew up in both towns). Las Vegas has about 16,000 people in it, and there are no casinos in this Vegas. It’s actually a pretty boring place. Most people have at least heard of Santa Fe. It’s a little bigger, and very artsy and progressive like most of the bay area.

How long have you worked at Pinole Pet Hospital / Groveway Veterinary Hospital?

I’ve been working at both Groveway and Pinole since 2015.

What is your favorite animal?

Box turtles are probably my favorite animal. As members of the chelonians (the turtle and tortoise superorder), they are truly living dinosaurs. They are also surprisingly inquisitive, resourceful, and entertaining. I like cats and dogs too, but I categorize them more in the realm of family members or furry people-animals, and that takes them out of the running for my favorite animal list.

What pets do you have?

I have a Chilean rose haired tarantula, a Mexican hairless dog (xoloitzcuintli), an unsavory Chihuahua, a tuxedo cat (the Holstein cow version), an Argentine Horned frog, and two ball pythons.

Describe yourself in 3 words: Friendly and easygoing.

What would people be surprised to know about you?

I am a horrible driver. If you see me on the roads, I would advise you to keep your distance . . .  but I’m working on getting better. There was no traffic where I’m from. In fact you would be lucky to ever see another car on many roads there, so it has been a big adjustment learning to drive in real traffic.

What is your favorite color?

Black is my favorite color these days (which I have been told by physicists is technically not a color, but the absence thereof), then maybe blue or green, the cool colors mostly.

What is your favorite food?

I like to eat anything, and I love to try new foods. Indian food, and sushi are at the top of my favorite foods list.

What is your favorite Holiday and why?

What are your aspirations?

I aspire to be a great vet who can competently care for many kinds of animals. Also, I would like to become fluent in Spanish, and Chinese, and travel all over the world.  One day, I would like to learn to play the banjo, and also learn to fly an airplane.

I also aspire to have the discipline, intelligence and work ethic that would be required to fulfill the rest of my aspirations!

Do you have a favorite quote?

I have many quotes that I like. Currently, I have been enjoying one by Abraham Lincoln:

“(It’s) Better to remain silent and be thought a fool than to speak out and remove all doubt.”
. . . not exactly inspirational, and not necessarily good advice,  but it is pretty funny, and the misanthropes among us would consider it a rather perspicacious observation.

You can make an appointment to see Dr. Elliott on Tuesdays at Groveway Veterinary Hospital and Monday, Wednesday, Thursday, Friday and every other Saturday at Pinole Pet Hospital!