Is It Poisonous For Your Pet?

When you think of poisonous foods or toxins for pets, what comes to mind? The ever common chocolate and avocado perhaps? But did you know that different kinds of chocolate can be more toxic than others? For example, dark chocolate is more toxic than milk chocolate and much more toxic than white chocolate. How about the fact that avocado is much more toxic to horses, cattle, goats, rabbits, and birds than dogs and cats? According to the ASPCA, avocado contains a toxic principle called Persin. It can lead to respiratory distress, fluid accumulation around the heart, and even death in birds, rabbits, and some large animals. Whereas only some dogs and cats may get only a mild upset stomach after eating a significant amount. 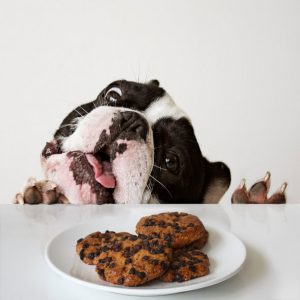 Common household items that you would expect to find in almost any home that could be detrimental to a dog or cat’s health include Acetaminophen (Tylenol), Ibuprofen, Batteries, Detergents, and Fabric Softeners. All of which can result in anything from ulcers in the mouth, stomach, or esophagus, to liver damage or worse. Animals are also attracted to the sweet taste of Ethylene Glycol (Antifreeze) but as little as a teaspoon can lead to kidney failure.

In terms of common household foods, many people know that Xylitol (sugar¬free sweetener) is not good for dogs but did you know that it is commonly found in chewing gum, mints, toothpaste, and even some peanut butter? Unbaked bread dough is also very dangerous to animals. It can expand in the stomach and if the stomach twists, it can cut off the animal’s blood supply resulting in emergency surgery. The yeast in the dough can also produce alcohol which can lead to seizures and respiratory failure. Grapes, Raisins, and Currants are toxic to dogs but did you know that even grape juice can lead to kidney failure? Onions, Garlic, Leeks, and Chives can cause anemia or gastrointestinal upset in both cats and dogs, however, only dogs are sensitive to Queensland Nuts (Macadamia Nuts). Ingesting these can result in lethargy, vomiting, or even difficulty walking.

A few things that are also worth mentioning would include the Sago Palm. A seemingly innocent ornamental potted plant found in many homes that, if ingested, can lead to vomiting, diarrhea, and seizures as well as liver failure. Tobacco can affect both dogs and cats and can lead to vomiting, tremors, collapse, and even death if ingested. Lilies (Easter, Day, Tiger, Japanese & Asiatic Varieties) can lead to kidney failure in cats whereas only Lilies of the Valley can result in heart rhythm problems or death in both dogs and cats. And finally, Zinc (found in metal or coins) can be toxic to both cats and dogs. Ingestion of even a single zinc penny can be fatal. Zinc toxicity can cause anemia as well as liver, kidney, or heart failure.

Our pets love us unconditionally and are always there for us. The least we can do is return the favor. Be aware of the all too common threats to our beloved furry pets that we have in our homes so that we can coexist together in a happy, healthy way. Signs of poisoning in dogs and cats can range tremendously based on the underlying poison so if you suspect that your pet may have been poisoned please contact the ASPCA Animal Poison Control Center at (888) 426-4435. Open 24 hours a day, 365 days a year.