When and why did you choose veterinary medicine as a career?

I didn’t know that I wanted to do it from the get-go.  I went to undergrad for biology and neuroscience. I did some research for a little bit and it just wasn’t what I wanted to do.  My friend suggested veterinary medicine, so I got a job as a tech and worked as a tech for 3 years and then went to vet school. It was a second thought career-wise rather than something I had wanted to do all along.

Give us a snapshot of your career to date

Once I graduated, I did a year in Nashville at a specialty hospital doing emergency and other things, and I had already been a tech in an emergency hospital.  I really fell in love with emergency then, and I went back to the same hospital in Baltimore where I had worked as a tech. I went from school in Virginia to Nashville back to Baltimore which is where I was a technician before.  That’s my hometown.

I was working in emergency, but doing nights and weekends. I wanted to transition to days but still keep some of that emergency because I really do enjoy it.  Moving was definitely an option - we weren’t set on living in Baltimore. I wasn’t actively looking for a job.

My friend from college lives in San Francisco and she was playing Australian rules football with VetnCare’s Regional Medical Director, and they were just chatting about the need for a Vet out here in Napa.  My friend texted me and ended up talking to the Regional Medical Director on the phone. I got to know more about the practice and VetnCare’s culture and it felt like it could potentially be a good fit. I spoke with our CEO, Andrew, and then came out and visited the practice and area.  We had a really good visit and ended up moving out here. Now I play Aussie Rules out here and last year we won the national championship!

What initially attracted you to becoming a partner with VetnCare?

The structure, that it is veterinary-led as a team, and there’s a big team culture behind it.  The ability to continue learning and to also mentor newer students and grads as well is definitely something I was looking for.  And the opportunity to become a Clinical Director and partner was a huge driver for me.

I’ve always thought that I wanted to own, but I didn’t feel that I was in a position to make the jump to complete ownership. I thought this was a really unique and interesting opportunity to be in the ownership field but not commit to opening my own place or buying my own place.  A lot of new Vets have so much student debt already that it’s almost on the scope of imagination to take out even more loans to open a business. VetnCare’s partnership model afforded me the ability to have some ownership without making that huge commitment or jump.

Was there a moment you knew that you wanted to be a partner? What happened?

When I brought up that I was interested in advancing my surgical skills into orthopedic surgeries and TPLOs, and Andrew (VetnCare’s CEO) was completely for that and completely on board.  He said ‘if that is something you want to pursue we can make that happen’. He was a proponent for further education. The culture of the organization in terms of further advancing veterinarians in both skill and their quality of life. 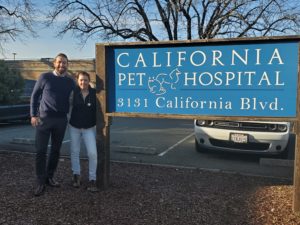 Do you have any mentors within VetnCare who you feel have motivated you, invested in you, or potentially even influenced your decision to become a partner?

My Regional Medical Director has been a friend both at work and outside of work.  I feel very comfortable and very often I’ll run ideas by her, cases by her and she’s helped me advance things like my ultrasound skills.

What's something that has happened here, that wouldn't happen anywhere else?

The time and money they put into their employees - and not just Vets but also their techs and support staff for further education. And there’s always thought put behind how any decision impacts the overall team.

What was the moment you knew you were in the right place?

I don’t know that I had a specific moment, but I wake up every day knowing I’m in the right place.  I have no regrets in my decision to pick up, move across country and start afresh in a new city, in a new place where we didn’t know many people at all.  It’s been one of the best decisions we’ve made. On a daily basis I’m like, “This is the right place for me”.

Tell us about one of the most impactful days you’ve had at VetnCare.

It’s bittersweet, but we had an emergency come in that was arresting, and it was an elderly German Shepherd with a GDB that had been going on for at least 12 hours or so.  So it was trying to pass away. And just - the team - rushing to get the dog back, setting up everything for CPR within a minute, and the performance of CPR and the team around that was what I would almost consider perfect.  And so they really impressed me. The dog ended up passing away, but not because of a lack of coordination and precision. They really impressed me so, even though the outcome wasn’t a happy one, I guess that was a good day.

What aspect of this partnership are you most excited about?

The commitment to one place for my career.  And knowing that the hard work is paying off.

How would you describe your relationship with, and the support provided by, the VetnCare management team?

What does VetnCare's tagline of 'independent and together' mean to you and CPH?

As a Veterinarian, you have the ability to make clinical decisions every day as you see fit, but also that there are always going to be other Vets there to support you if you have any questions or if you need any assistance with procedures or cases.

What does being a partner in a veterinary-led and veterinarian-owned business mean to you?

It just means that there’s a very collaborative culture to it.  I feel that it empowers Veterinarians to take control of their finances a bit more.  As a community, I think that we sort of put that aside a lot and being able to partner in a hospital can give you financial freedom.  And that overall makes your clinical experience in everyday life that much more fulfilling.

Tell us some more about the CPH team...

We’re really like family more than just coworkers.  We celebrate with each other - both milestones at work, but also milestones in our personal lives as well.  So it’s a really cool, fun group. I feel very lucky to have partnered in this hospital.

What exciting developments can we expect from CPH now and in the future?

My vision for CPH is to expand on our availability to the community in an emergency capacity.  And to expand on our orthopedic and soft tissue surgical abilities. The upcoming renovation will give us more space to accomplish these goals.

What advice would you give to someone interested in joining VetnCare as an Associate or even potentially a partner like you?

Take advantage of the community of veterinarians that you will have at your disposal, and learn from them.