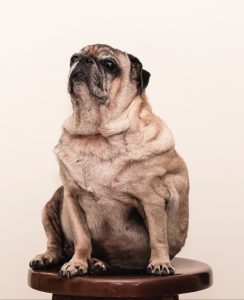 Obesity is the most common nutritional disorder that we see in practice.  Obesity is defined by some as a complex physiological issue with genetic and endocrine causes.  Generally, however, it is a condition of excessive adipose tissue (fat).  The difference between an overweight animal and an obese one is in the percentage that the animal is over its ideal weight.  An overweight animal is 10 to 20 percent above their ideal weight. An obese one is over 20 % over its ideal weight.

Who is typically obese?

Obesity is seen in dogs more frequently than cats. In females more than males. Animals that have been neutered or spayed tend to have weight issues. Older animals, poorly exercised pets animals, and “only pets” within a family are typically obese.

Obesity is caused by a higher level of energy intake than is necessary for the energy requirements of the animal.  Too many calories “in” and too few calories used.  This causes the remaining energy to be converted to fat and stored as a future energy source.  Obesity can be caused by disease, such as hypothyroidism. Or by medications such as Prednisone (a steroid) and Phenobarbital (a barbiturate).  It can be stress related, too, wherein the animal uses eating to cope with a stressor.  Obesity can also be genetically predisposed in some breeds such as; West Highland White Terriers, Bassett Hounds, Cavalier King Charles Spaniels, Dachshunds, Beagles, and Labradors.

Obesity is detrimental to animal health and longevity.  It can cause or exacerbate orthopedic disease. Diabetes Mellitus, cardiorespiratory disease, urinary disorders, hepatic lipidosis in cats, reproductive disorders, neoplasia (mammary tumors, for instance), other dermatological diseases, and anesthetic complications.  It has been shown in studies that a weight reduction of just 10% may improve lameness. In a similar test, over the span of 8 years of more than a thousand animals, where the test group was fed 25% less than the rest of the subject animals…the test group had a marked reduction of osteoarthritis.

The Australian Veterinary Association says that only about 5% of companion animal obesity is medically treatable, leaving 95% that must be treated through moderation of caloric intake.  There are no pharmaceuticals currently licensed for the purpose of weight loss in animals. 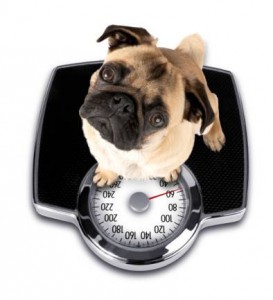 Treatment begins with the increased awareness of Companion Animal Obesity as a serious medical condition.  The main treatment is dietary management (quality/quantity) and increased physical activity.  Animals that eat to cope with stress should not undergo dietary reduction until the root problem of the stressor has been identified and alleviated.  By doing so, you take away the animals natural coping mechanism.  The question of “why” an animal is overeating must always be addressed.

In order for any modification of behavior or diet to be an effective treatment for an obese or overweight companion animal, everyone in the household must be made aware of the seriousness of the situation. The correct amount of food should be given (measured with a measuring cup), and an acceptable amount and type of treats may be given (no more than 10% of the daily caloric intake).

The goal of a healthy weight can be an achievement for all concerned!